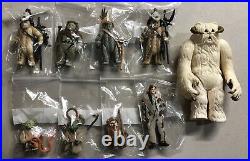 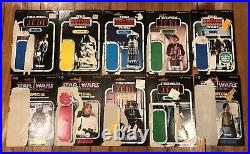 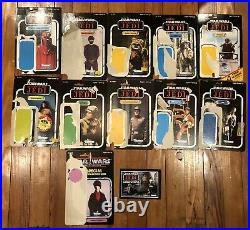 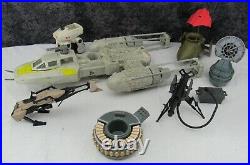 Offered for sale is my entire vintage Star Wars collection that was started as a kid and then refined as an adult. The collection includes nearly every original vintage Star Wars action figure with their original weapon and accessories as shown. I was one of those OCD children that took great care of my toys ensuring that the weapons were always with the figures and then placed with the figure when they were put back in the case when I was done playing with them. After I graduated from college I decided to sell off all of my G1 Transformers, then all of my Masters of the Universe, but for some reason I could not part with the Star Wars, because I had so many fond memories of playing with them as a child. I would sift through these collections and look each figure over carefully to decide which one had the better paint, less faded or discolored areas to the plastic, nice tight joints, etc.

And then I would keep the best ones and sell off the others. I also added a majority of the variants during this time.

My most glorious moment was finally finding the last 17 from a collector in Sweden on E-bay. Please note that since E-bay only permits 12 pictures I cannot possibly show all of the fine details that you would want to see, however I do have high resolution photos of the figures and that would allow you to better see their condition and the weapons/accessories. These photos were also taken for my protection should anyone try to switch out weapons and claim I sent them repros. For the most part I would say that these are in excellent to near mint condition with the exception of a few which have minor paint wear to the face or hands, possible minor discoloring from age, and/or standard light wear from play as a child. Also included is a nice stack of (21) original card backs that have been removed from the bubble blisters to include four of the last 17 figures. In addition to the card backs there are some vehicles that include the Y-Wing fighter, Desert Sail Skiff, Speeder Bike, Blaster Canon, Mobile Laser Canon, and an MTV-7 in addition to Jabba the Hut w/Salacious Crumb, the Rancor Monster, a Tauntaun, and a Patrol Dewback. Figures Include: 2-1B Medic Droid. Original cloak, belt, & weapon. (2 versions)- original cape & lightsaber Bespin Security Guard I. (2 versions) C-3P0 (with Removable Limbs). Original weapon but reproduction comm. Questionable weapon (one original version matches this weapon, but not certain) Hammerhead. Han Solo in Bespin Outfit. Han Solo (In Carbonite Chamber).

Sy Snootles and the Rebo Band. If you have any specific questions, please ask. The item "Vintage Star Wars Action Figures with Last 17 + Variants Original Weapons" is in sale since Wednesday, December 15, 2021. This item is in the category "Toys & Hobbies\Action Figures & Accessories\Action Figures". The seller is "e-connoisseur" and is located in York, Pennsylvania. This item can be shipped worldwide.