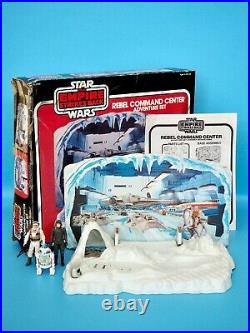 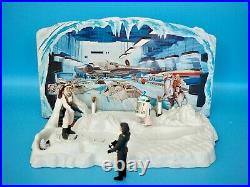 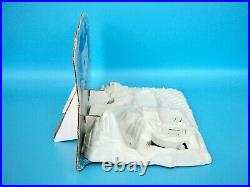 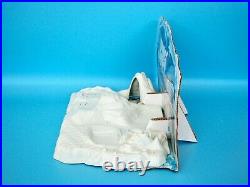 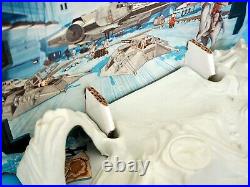 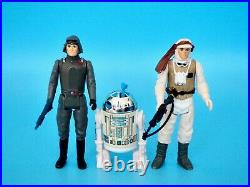 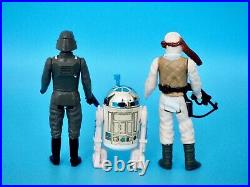 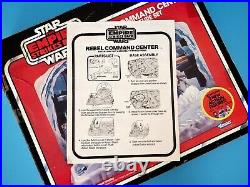 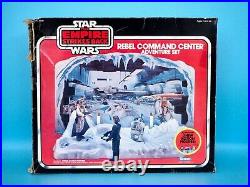 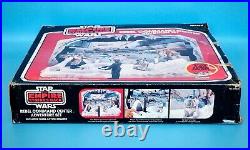 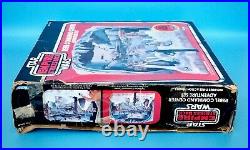 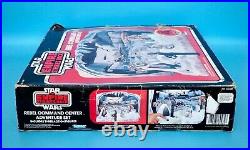 Up for sale, a 1981 Star Wars Rebel Command Center Adventure Set playset in excellent condition, complete with the original box, instruction sheet, and the three original action figures (with original blasters). A Sears Exclusive playset, the Rebel Command Center was only offered briefly and first seen in the 1981 Sears Christmas catalog. Prized for their relative scarcity, the Sears playsets are unique and colorful, with sturdy cardboard backdrops and locales not featured elsewhere in Kenner's vintage Star Wars line. The Rebel Command Center features its original cardboard backdrop with a bright illustration of Echo Base, showing limited edge wear with only one light central crease seen from the back.

The two V-shaped inserts that prop up the backdrop are modern replacements, while the Echo Base backdrop itself is original, along with the white plastic snow base, complete with its action levers. All three original figures are included, and this set features the AT-AT Commander, Luke Skywalker (Hoth Battle Gear), and R2-D2 with Sensorscope. AT-AT Commander: Good posable joints, extremely clean paint, and original 1980 Hong Kong COO. Original blue blaster included and "float test" approved.

R2-D2 Sensorscope: Good joints, clean paint on the dome, and while the sensorscope is loose while raising it, once fully raised it stays up well. The sticker is in good shape, with minimal fading and only one small scratch on the back. The figure has a 1977 Hong Kong COO. The original instruction sheet is clean and crisp, with unfaded paper. The original included box has bright graphics, only opened on one end, with visible edge wear and one small tear on the back of the opened flap. The POP has been removed. International orders will be declared as merchandise, and the value of merchandise will be declared as the amount paid. We cannot declare anything as a gift or for a lesser value. We do our best to describe all items with honesty and accuracy, but to be sure, please. The item "1981 Star Wars ESB Rebel Command Center Vintage Kenner Sears Playset with Figures" is in sale since Thursday, September 17, 2020. This item is in the category "Toys & Hobbies\Action Figures\TV, Movie & Video Games". The seller is "collectorcantina" and is located in Seattle, Washington.

This item can be shipped worldwide.